Home » What is Celiac Disease? » Getting Tested 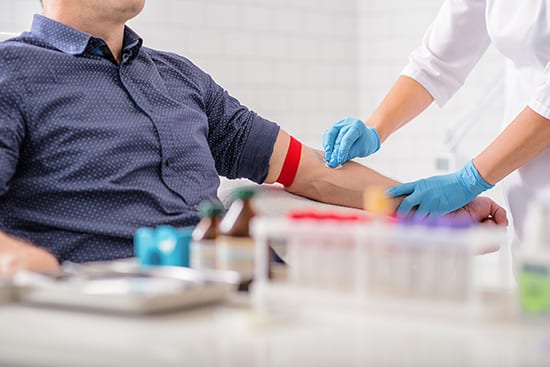 When to Get Tested for Celiac Disease

Almost all systems and parts of the body may be affected by celiac disease. As a result, it is a bit of a clinical chameleon that wears many disguises. Knowing when to undergo celiac disease testing can be quite difficult largely because the symptoms often mimic those of other diseases, including irritable bowel syndrome (IBS), Crohn’s disease, intestinal infections, lactose intolerance and depression.

There are more than 300 symptoms of celiac disease, a serious genetic autoimmune disease. Symptoms may vary among different people.

Some of the most common signs and symptoms of celiac disease include:

A review of the evidence shows that the blood tests used in the US have a high rate of accuracy. The IgA-tTG test has the advantages of being simple, inexpensive, widely available and typically covered by insurance, in addition to being very accurate in cases of untreated celiac disease.

Blood tests are the first step in a diagnosis of celiac disease. A doctor will order one or more of a series of blood tests to measure your body’s response to gluten.

It is important to remain on a normal, gluten-containing diet prior to testing for celiac disease. Do not change to the gluten-free diet before being tested for celiac disease. If the blood tests and symptoms indicate celiac disease, a physician will likely suggest a biopsy of the lining of the small intestine to confirm the diagnosis. See below for more information on the biopsy.

Learn more about the gluten challenge Imaware™ has developed the most comprehensive at-home celiac disease test that provides actionable insights and information that can help you take control of your health. Beyond Celiac has partnered with imaware™ to bring awareness to their home-based celiac disease test.

imaware™ utilizes whole blood for their home-based tests which ensures higher precision than any other home-based health testing method.

The test looks at a total of 5 biomarkers, including tTG. This test is an easy alternative for those having difficulty convincing their doctors to order their blood test or for those searching for a convenient method for testing for celiac disease.

imaware™ tests can also be ordered for anyone over the age of 18, so it makes for an easy way to get friends and family members tested as well.

If your blood tests come back negative there is still a chance you could have celiac disease. If you have other risk factors and still suspect celiac disease, or if you are continuing to experience symptoms after a negative blood test, talk to your doctor about performing further tests such as an endoscopy or genetic screenings. Continued testing is encouraged to establish an accurate diagnosis, whether for celiac disease, non-celiac gluten sensitivity, or other diseases with similar symptoms.

To confirm a celiac disease diagnosis, your doctor may recommend an upper gastrointestinal endoscopy. This procedure will allow your doctor to identify any inflammation or damage in your small intestines, which is a sure sign of celiac disease. Your doctor will take a small biopsy of your intestines during the endoscopy, which will help to confirm your diagnosis.In order for the endoscopy to be accurate, the patient must be on a gluten-containing diet. An endoscopy may sound like a big procedure, but it only takes about 15 minutes and is a low-risk procedure.

If your small intestinal biopsy results indicate that celiac disease is not present, but you and your doctor still suspect gluten is the cause of your symptoms, you may want to explore the possibility of non-celiac gluten sensitivity (‘gluten sensitivity’). Currently, there are no accepted methods of testing for gluten sensitivity.

Celiac disease damages the villi, which are finger-like projections in the small intestine. Villi are responsible for absorbing nutrients from food. Because of this, it is highly likely that people with celiac disease will be deficient in essential vitamins and nutrients when diagnosed. Laboratory tests should be done within three to six months following a diagnosis and annually for the rest of your life.

The celiac disease genes alone are not enough to develop celiac disease. Up to 40 percent of people have these genes, yet only a very small percentage of these people go on to develop it. That’s because an environmental trigger is necessary. This trigger can be a stressful event, illness, surgery, pregnancy, etc. Because having the genes does not automatically lead to celiac disease, genetic testing can only rule out celiac disease. It cannot concretely diagnose celiac disease.

Genetic testing is beneficial for relatives of people diagnosed with celiac disease. Since it is a genetic (hereditary) autoimmune disease, family members are also at risk for developing it. It’s recommended that relatives are given the blood test to determine if they have celiac disease. If the test is negative, it should be repeated every 2-3 years or sooner if symptoms occur. That’s because celiac disease can develop at any time. Those with negative test results can go on to get the gene test. If the gene test is negative, the relative can stop with regular screening.