Home » What is Celiac Disease?

Celiac disease is an autoimmune disease that’s triggered by consuming gluten and results in damage to the small intestine.

When a person with celiac disease eats gluten, the immune system sees gluten as a threat and mounts an attack. However, it ends up damaging the villi of the intestines, which help to digest food. Damaged villi make it nearly impossible for the body to absorb nutrients, leading to malnourishment and a host of other issues. 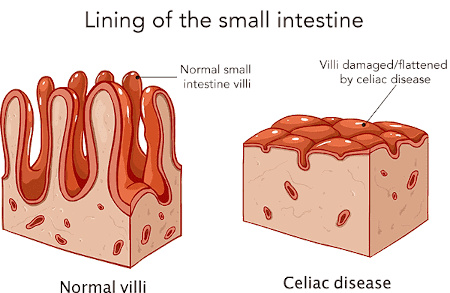 What are the Symptoms of Celiac Disease?

The most common symptoms of celiac disease include:

What are Some Risk Factors for Celiac Disease?

People with the following conditions have an increased risk of developing celiac disease:

How Do Doctors Test for Celiac Disease?

Note that the patient must be eating gluten at the time of testing for the results to be accurate. Going on a gluten-free diet before getting tested may affect the validity of the results.

There are currently no surgical treatments or medicines available to treat this autoimmune disease. Researchers are working hard to find alternative therapies and possibly a cure. You can keep up on treatment progress by viewing our drug development pipeline. We also send updates regularly to our research newsletter.

What Happens If You Don’t Treat Celiac Disease?

If people with celiac disease continue to eat gluten, it increases the risk of developing or worsening:

Celiac disease is hereditary, which means that in order to develop it you have to have one or both of the HLA-DQ2 and HLA-DQ8 genes. Having the gene(s) alone is not enough, however—it is estimated that 30% of the population has one or both of the genes that are linked to celiac disease, but only 1% develop the disease. Some other factors or environmental causes activate the genes, causing the body’s immune system to react to gluten and damage the small intestine. What the factors are that activate celiac disease in susceptible people is still a mystery, though research indicates that stressors such as illness, trauma, puberty or childbirth may play a part. Beyond Celiac is dedicated to supporting research to identify the factors that lead to the development of celiac disease, with the goal of being able to actually prevent the disease from starting.

What is the History of Celiac Disease?

It is believed that celiac disease first began in humans at the advent of the first agricultural revolution.

As early human diets began to expand, adding in grains, domesticated livestock and cultivated crops, most bodies were able to adapt. However, some did not. This resulted in certain food sensitivities, intolerances and celiac disease making their first appearances in human history.

Before the real trigger for celiac disease was discovered, many treatments and diets were tested, including strict rice, mussel and even banana diets. It wasn’t until World War II that wheat and, finally, gluten began to come into focus as the culprit.

View more information about the History of Celiac Disease.