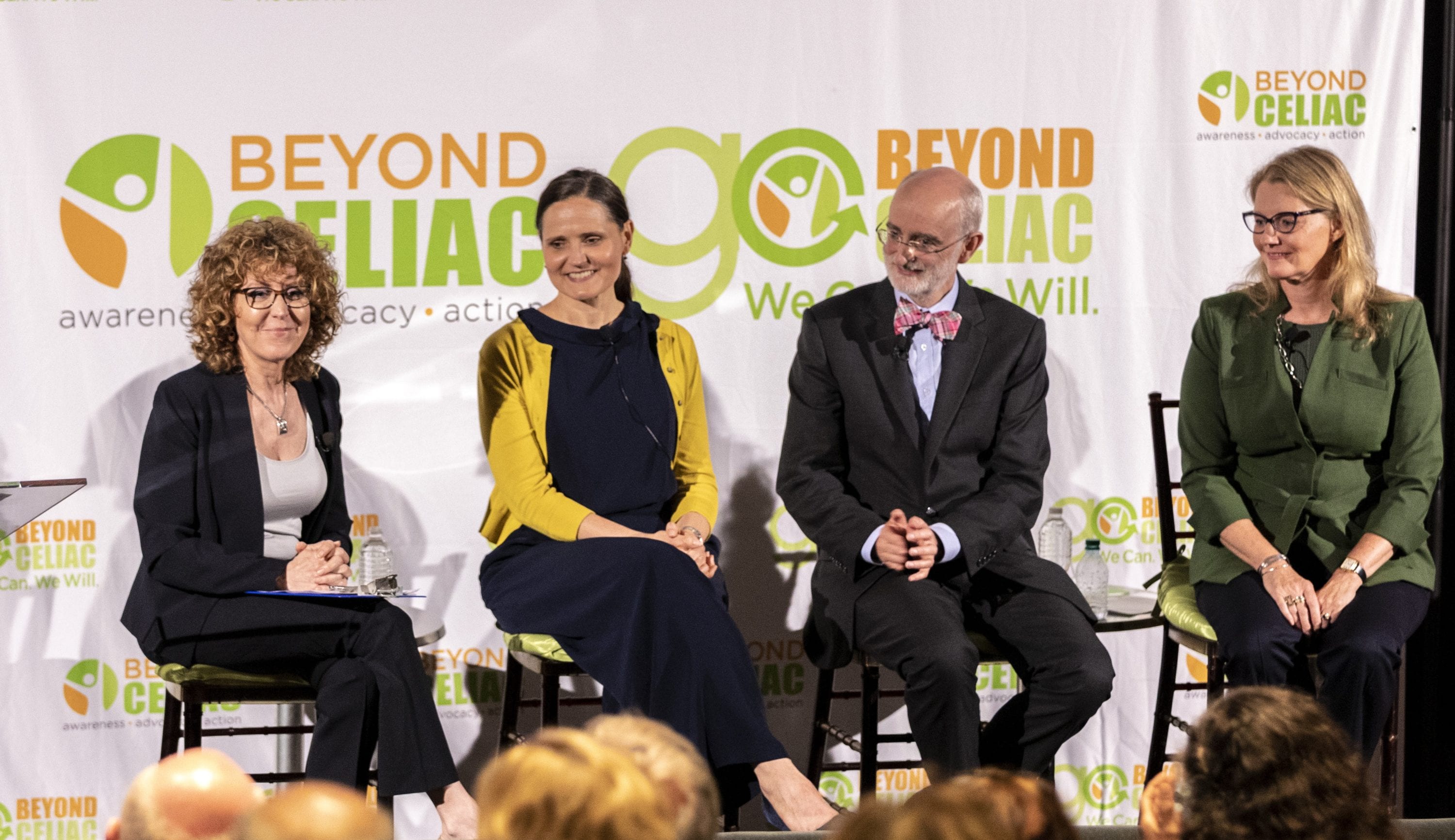 Patients are used to hearing that the first drug to treat celiac disease is likely to be approved in about five years. But at the 3rd Annual Beyond Celiac Research Symposium held in Philadelphia Thursday they got a behind the scene looks at what it is really going to take to get new treatments to the market.

Celiac disease and drug development experts on the symposium panel had a wide-ranging discussion before an international live and webcast audience detailing the many steps taken before, during and after a new treatment enters even the earliest phase of clinical trial.

The importance of the patient voice throughout the drug development process was a key point.

“Clinical trials are research to try to determine if a new medical treatment is safe and does it work,” said Murray, who regularly sees patients and does research at the Mayo Clinic. He said 30 percent of celiac disease patients on a gluten-free diet still have symptoms, demonstrating a “substantial need” for new treatments.

“When I see a newly diagnosed patient, they say, ‘Doc, where is the pill that will allow me to live a normal life?’” Murray said.

Treatments that would enable celiac disease patients to eat a normal diet are a long term goal, but the first drugs likely to get approved would work alongside the gluten-free diet providing protection against damage from inadvertent cross contamination, for example when eating out. Murray noted that developing a drug that would prevent celiac disease in the first place has not received as much attention so far, though some work is being done in pediatrics.

“When I started my practice, a drug for celiac disease was not on the horizon,” she said. “In 10 years, we have gone to it being a possibility in the next few years. It’s not often that happens in medicine.”

Overall, researchers, drug developers and regulatory agencies like the U.S. Food and Drug Administration look at whether a new treatment has enough promise to help enough people, Murray noted.

Drug companies and academic researchers are looking a variety of ways in which a drug to treat celiac disease might work, including breaking down gluten, tightening the junctions between cells, preventing gluten peptides from triggering immune cells and building immune tolerance to gluten, according to Murray.

“The patient voice is being elevated, legitimized and listened to,” said Deal, who works on developing, validating and using clinical outcome assessments that provide evidence a medical treatment has benefit. “The patient’s voice is the first word, last and definitive word.”

She also noted that one of the things patients have used their voice to say is that they do not like to be called research subjects, or patients, for that matter. Deal calls them research partners, a term the other panelists adopted in the discussion.

Randomized clinical trial: study in which the participants are divided by chance into separate groups that compare different treatments or other interventions

Placebo: substance that looks just like a regular treatment or medicine, but is actually inactive

She advised those who are thinking about volunteering for a clinical trial to be fully informed about what they are getting into, including an understanding of what it means to be randomized and what a placebo is. The benefits of participating in a clinical trial range from helping future generations, to developing a sense of connection with the larger community, to gaining an appreciation of the dedicated scientists who are also going through the rigorous drug development process, Deal said.

In celiac disease research some trials use a gluten challenge to test whether a new treatment works, something potential study participants should be aware of, Deal noted. While some may balk at the idea of consuming gluten, Murray said it’s surprising how many are willing to undergo a challenge in a study.

In an early study he conducted, the needed number of participants was quickly filled ahead of the trial. “They weren’t going to get something delicious to eat,” he said, adding that the gluten came in a capsule.

Potential study participants have to evaluate the risk and benefit balance of undertaking a gluten challenge, he acknowledged.

Murray noted that when he is working with research partners, he always tells them, “My top priority is your health and welfare…We are going to do good work and do it properly…but your health and safety is paramount.”

From that simple premise and promise, things get a lot more complicated.

How drugs are developed

After sometimes years of pre-clinical work, drugs have to go through three phases of clinical trial, starting with a small number of study participants usually given a single dose of the medication to determine whether it is safe. In the second phase, the number of participants grows, and various doses are tested to see which provides benefit to patients. In the final third stage, thousands of patients are needed and tested across multiple medical centers, usually over the course of several years.

At each stage, the cost of the clinical trial increases. As drugs advance, there is a “culling of the herd,” Murray said, as many that start in Phase 1 do not make it to Phase 2.

For every 10 drugs that go into Phase 1, six or seven drop out at Phase 2, Deal said. It’s lucky if one or two get approved over a 10 year process, she noted.

Even if a drug is approved, that does not necessarily mean it will be accessible to patients, Deal said, adding that access is still dependent on insurance companies paying toward the cost of a prescription. “We are working hard to make the case that celiac disease is prevalent and burdensome,” she said.

Kupfer emphasized how important access is. Barriers to access even exist in relationship to the gluten-free diet since some celiac disease patients do not get insurance coverage for dietitian visits. “Cost should not be a barrier,” she said.

“This is a fight to fight,” said symposium moderator Marie Robert, MD, Beyond Celiac chief scientific officer and a surgical pathologist at Yale University School of Medicine. Insurance coverage is imperative, and Beyond Celiac is working to engage private and public payors in the conversation regarding new celiac disease treatments, she said.

Asked outright how many years it be before a new celiac disease treatment is on the market, Murray said probably five years.

While drug development and clinical trials lead to much discussion at the symposium, non-celiac gluten sensitivity was another focus. Kupfer outlined the challenges faced by those with the condition, which is mainly a diagnosis of exclusion once celiac disease has been ruled out. Currently, there are no biomarkers for gluten sensitivity and consequently no tests to definitively diagnose it.

Meanwhile, celiac disease is ideally diagnosed with blood tests, a biopsy in adults and some children and recovery on the gluten-free diet, Kupfer said.  Those who have symptoms or other reasons to think they might have celiac disease should see a physician and follow these steps, according to Kupfer. If someone puts them self on the gluten-free diet, the chance of getting a proper diagnosis is reduced unless the patient is willing to do an extended gluten challenge, she added.

“If we want to make the diagnosis correctly, we have to do it correctly the first time,” she said, whether it is ultimately celiac disease or gluten sensitivity. Researchers are looking into the possibility that those who have gone gluten free could be diagnosed with celiac disease after only a short challenge, but that is not yet a reality.

As for gluten sensitivity, Murray cautioned against too quick a conclusion that gluten is causing the symptoms patients report. He said some of the improvement seen when a gluten-free diet is initiated may come from overall healthier eating. FODMAPS or a different medical condition with similar symptoms may also come into play.

Additionally, the gluten-free diet may provide temporary relief and delay a more serious diagnosis. “If celiac disease has been excluded, you should work with your doctor to find out what is causing symptom,” he said. The culprit may not be food, but your gut, he added.

What patients want to know

When Robert turned to questions from the webcast audience, Murray was asked about the current rate of celiac disease diagnosis.  He said 2016 research based on National Health and Nutrition Examination Surveys shows that about 50 percent have been diagnosed . But he cautioned that number does not take into account people who have undiagnosed celiac disease who have put themselves on a gluten-free diet. He described them as “undiagnosable patients” whose numbers would otherwise drive down the overall celiac disease diagnosis rate. The diagnosis rate for celiac disease is often cited as being around 17 percent, but Murray said the recent evidence shows it is much higher.

In response to a question about ongoing healthcare, Murray said celiac disease patients should have follow-up visits with a knowledgeable physician. Blood test results measured at follow-up visits should become negative after which a visit every one to two years is advised.

“Informed, compassionate, available healthcare is crucial for all celiac disease patients,” he said.

A webcast audience member from Papau, New Guinea, asked how damaging a single gluten exposure is. “The only way to know is to get follow-up care,” Kupfer said. But it’s likely a onetime exposure would not cause irreversible damage, she added.

Murray described a recent study he and others at the Mayo Clinic conducted in which some patients were given a single gluten challenge and others were given a placebo. Patients did not know which group they were in. Both groups reported similar symptoms, evidence of how complicated reactions to the possibility of gluten exposure are.

Murray agreed with Kupfer that a single exposure would likely cause symptoms that would last for a few days but would not cause intestinal damage. Damage would occur, he said, if the gluten exposure was frequently repeated.

Beyond Celiac started holding its annual research symposium in 2017, inviting both a live audience and a global audience through a webcast. For the first time, the symposium was held during Celiac Disease Awareness month.

“Information is power, and we as a community have a very big part to play in accelerating research for treatments beyond the gluten-free diet and ultimately a cure for celiac disease,” Alice Bast, Beyond Celiac chief executive officer, said at the start of this year’s event.

She noted the role of the new Beyond Celiac science department, led by Robert. Bast credited Robert with “forging new ground by identifying promising directions in research,” allowing Beyond Celiac to directly fund cutting-edge celiac disease investigators. Robert is also leading development and implementation of the Beyond Celiac patient-centered research agenda.

In a move to build on engagement of those attending or watching the symposium, audience members are being were invited to help test a new mobile App for Go Beyond Celiac, a patient platform and registry. The App, which will launch later in June is designed to make it easier to sign up for and use Go Beyond Celiac on cell phones.

Go Beyond Celiac enables celiac disease patients and caregivers to tell their story before, during and after diagnosis. More than 4,000 people have already joined Go Beyond Celiac, creating a more complete picture of the disease, including its variability and challenges. It provides a way for celiac disease patients to use the voice that was cited throughout the symposium as being so important in advancing research.