How Celiac Disease is Triggered

How Celiac Disease is Triggered

Celiac disease is a serious, genetic autoimmune disorder triggered by consuming a protein called gluten, which is found in wheat, barley and rye. When a person with celiac eats gluten, the protein interferes with the absorption of nutrients from food by damaging a part of the small intestine called villi. Damaged villi make it nearly impossible for the body to absorb nutrients into the bloodstream, leading to malnourishment and a host of other problems including some cancers, thyroid disease, osteoporosis, infertility and the onset of other autoimmune diseases.

How Gluten Damages the Intestines

In someone with celiac disease, undigested gluten fragments trigger a reaction by the immune system in the small intestine. The reaction occurs in a series of steps, which ultimately damage the villi (finger-like projections that line the small intestine) and prevent nutrients from being absorbed.

Additionally, the partially-damaged enterocytes release an enzyme, called tTG. This tTG enzyme attaches to the gluten fragments. When tTG attaches to gluten, it changes the gluten in a way that sets off the primary immune system response. The gluten that has been changed is picked up by special white blood cells, called antigen-presenting immune cells. These white blood cells present the gluten using a receptor on the surface of the white blood cells. By presenting the gluten, the receptor signals to another type of immune system cell, called a Helper T-Cell. T-Cells fight disease in the body, but in celiac disease T-Cells are triggered by gluten to mistakenly attack the enterocytes.

The Helper T-Cells secrete chemicals that cause three things to happen:

Additionally, scientists theorize that in response to gluten,zonulin, a molecule made by the body and linked to inflammation, may play a role in loosening the tight junctions earlier in the process.

Learn more with the following resources:


Find the latest information about celiac disease drugs being studied, how they would work and how far they are in the clinical trial process with our drug pipeline.


Keep up to date on the latest research on celiac disease treatments by following our research news feed or signing up for our research emails. 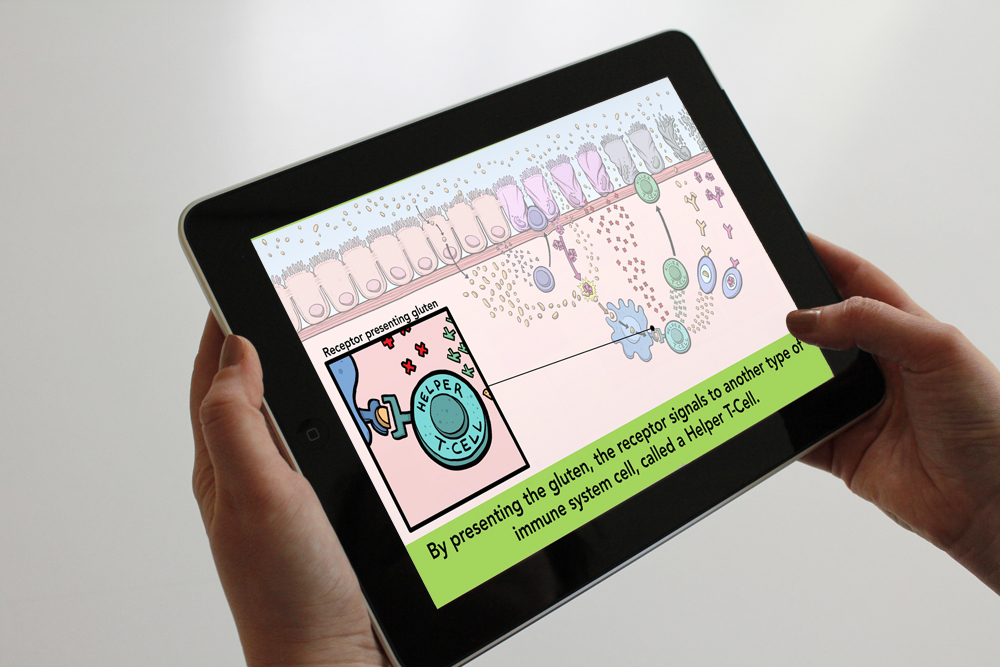 For an in-depth, illustrated look at the complex reactions caused by gluten in the body, watch our video,Gut Reaction: How Celiac Disease Is Triggered and How It Might Be Treated, which explains in detail how celiac disease works and how scientists are approaching ways to treat it.

Find out everything you need to know about how gluten damages the intestines of those with celiac disease. Follow the path it takes in your body and see a demonstration of how potential treatments could work.

Seeing what happens in your body when you eat gluten and have celiac disease, and how potential treatments would work, can help you better understand developments in celiac disease research.