Home » A biopsy might not always be needed to diagnose celiac disease in adults, a new study suggests

But is the evidence strong enough? 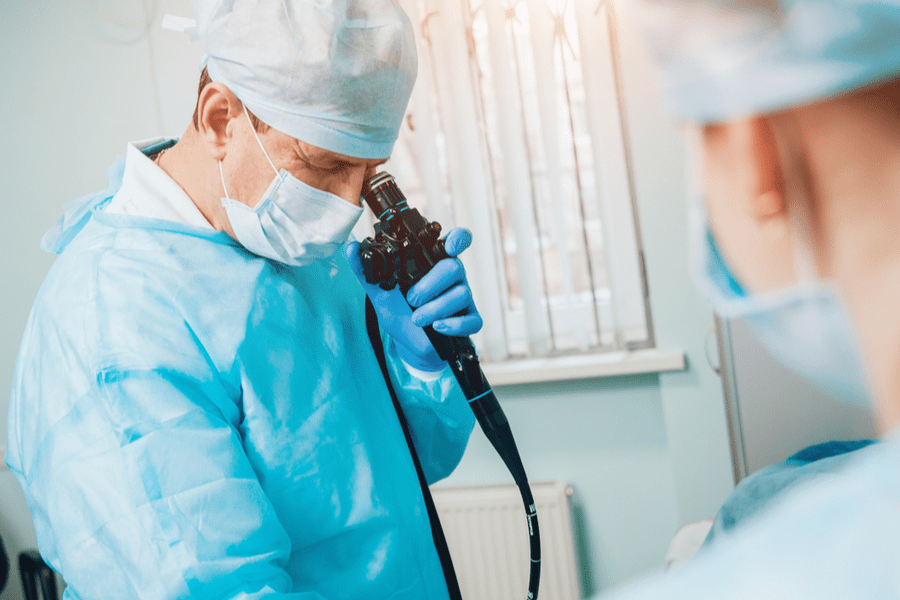 An intestinal biopsy is needed for celiac disease to be diagnosed in adults in the United States, but a new international study suggests the biopsy might not be necessary in many cases.

The study found that when participants’ anti-tissue transglutaminase immunoglobulin A (TTG) tests were highly positive, ten times the upper limit of normal, they almost always also had the level of damage to the intestine that is the hallmark sign of celiac disease.

Still, some celiac disease experts in the United States, including one of the study authors, caution that while evidence from the study adds to data about the predictive value of the TTG test, it is not enough to negate the value of the biopsy in diagnosis.

The role of the biopsy in celiac disease diagnosis is a controversial topic and the subject of ongoing research.

Related: An earlier look at the role of the biopsy

“My personal opinion is that these results should inform future guidelines,” said study author Benjamin Lebwohl, MD, director of clinical research at the Celiac Disease Center at Columbia University. “But I believe it’s premature to adopt a non-biopsy approach based on these data.” He noted that other study authors feel more strongly about moving towards diagnosis without a biopsy.

In fact, the study says the “strong predictive” nature of the blood test results supports a “no-biopsy” approach in diagnosing celiac disease in adults. The study, done by researchers from eight countries, including the United Kingdom, the United States and Italy, was published in the journal, Gut.

Pediatric guidelines in Europe already allow for a diagnosis of celiac disease in children with highly positive TTG blood test results, though these guidelines have not been adopted in the United States.

Joseph Murray, MD, a celiac disease expert at the Mayo Clinic, who was not involved in the study, said a no-biopsy approach is evolving, with increasing evidence that supports it, but a number of detailed procedures have to be followed. In addition to highly positive TTG test results, European Society for the Study of Pediatric Gastroenterology, Hepatology and Nutrition (ESPGHAN) guidelines for children in Europe include a second, separate test for anti-endomysial antibodies (EMA).

“The key thing is, the study is encouraging,” Murray said. “But following all the details is critical.”

Endoscopy: Typically, an outpatient procedure done under sedation and local anesthesia in which a long thin tube with a camera on the end is inserted in the patient’s mouth and makes its way to the small intestine, sending a video image to a monitor allowing the physician to see any obvious abnormalities.

Biopsy: The removal of small samples of the lining of the small intestine taken during an endoscopy, which are then studied by a pathologist to determine whether evidence of celiac disease is present.

In the United States, most adults are diagnosed with TTG blood tests, followed by an endoscopy and biopsy, he said. Murray noted that restrictions caused by COVID-19, including risks related to having the procedure in a medical facility, may have altered that a bit. “In 2020 [and 2021], having an alternate pathway (to diagnosis) is not a bad thing,” he said.

The new study included about 1400 adults of which 431, or 30 percent had TTG test results of at least 10 times the upper limit of normal. Of these, 424, or 98 percent, had severe enough intestinal damage on biopsy to be diagnosed with celiac disease.

Lebwohl noted that the study measured the performance of the TTG test in variety of settings, finding that in some a highly elevated level was 100 percent predictive of celiac disease, but in others it was 95 percent.

“Ninety five percent sounds like a near-certain diagnosis,” he said. But in reality, that means if we were to rely on antibody testing exclusively, one in 20 people with this highly-elevated antibody level would be erroneously diagnosed with celiac disease and prescribed a potentially unnecessary gluten-free diet.”

Lebwohl called that false-positive rate unacceptable. He also worries that if a no-biopsy approach is adopted and adherence to the 10-times cutoff becomes “fuzzy” and allows a diagnosis in less stringent circumstances, the rate of diagnosis errors could get even higher.

He noted that there are no medical guidelines that advocate for a biopsy-free approach to diagnosing celiac disease in adults. Still, he said, some people being tested for celiac disease may find the reliability of the high TTG test alone is sufficient for diagnosis, particularly if there are special circumstances that make a biopsy risky, such as a bleeding disorder.

In the study, participants fell into three groups:740 who were seen at a celiac center in the UK and had a high suspicion of having celiac disease; 532 who had general gastrointestinal symptoms, were referred to the hospital for an endoscopy and had low suspicion of having celiac disease; and 175 who had positive blood tests and biopsies done at multiple sites in eight countries.

The study was set up to address concerns from adult gastroenterologists about a no-biopsy approach. Gastroenterologists have pointed to lack of international, multicenter data, including testing in groups with a low prevalence of celiac disease.

Across the three groups, “almost all individuals” with sufficiently high TTG test results have the intestinal changes that lead to a diagnosis of celiac disease, the study says. This was true whether the study participants were at high or low probability of having celiac disease, the authors wrote, noting that their results complement earlier studies and show a no-biopsy approach can be used in adults with different risk levels for celiac disease.

An upper endoscopy with biopsy is expensive, with costs related to the procedure itself and the processing and analysis of the intestinal samples taken, the study notes. Additionally, it can be poorly tolerated by patients and is an invasive procedure that comes with some risks. Finally, results are dependent on how the biopsy is read, “meaning cases can be missed,” the study says. For these reasons, the authors wrote, a non-invasive approach to diagnosis of celiac disease is “of great interest.”

While the biopsy has some weak points, there are advantages to always doing an endoscopy and biopsy as part of diagnosis, Murray said. In older adults, the endoscopy can reveal other issues, including ulcers and malignancies. Additionally, a benchmark biopsy at diagnosis can be compared to follow-up biopsy to see if the intestine is healing, according to Murray, who does follow-up biopsies for his celiac disease patients as part of disease management.

“If a patient has symptoms that mandate examination for additional conditions, for example, a suspected ulcer, that is all the more reason not to skip an endoscopy,” Lebwohl agreed.

Variability and lack of standardization of TTG test analysis is one of the major challenges of implementing a no-biopsy approach to diagnosis, the study says. “The inability to compare TTG results accurately between different assays increases the chances of misdiagnosis if a uniform threshold is used,” the authors write. They note the drop, from 99 percent to 95 percent, in the ability of the test to accurately predict severe enough intestinal when two of the study groups were compared to the one made up of patients from several international study centers. “This raises the concern that sole reliance on [10 times the upper limit of normal TTG results] will lead to a false positive diagnosis in around 1 in 20 cases,” the study says.

“As a gastroenterologist who sees adults, I will continue to advocate for a biopsy as the default in all cases since I do not think it is acceptable to prescribe a long-term gluten-free diet if there is a 5 percent chance it is unnecessary,” Lebwohl said.

European pediatric guidelines recommend that a highly positive TTG test result be followed another type of test, the EMA.

The new study did not include EMA testing in all patients because it is expensive, labor intensive and results are open to interpretation, the authors wrote, noting that some celiac disease centers have stopped performing EMA tests. Including EMA testing could discourage adoption of the no-biopsy approach, the study says. A test for deamidated gliadin peptides could be used along with TTG testing as an alternative to EMA, the study suggests.

Guidelines in the United States

American College of Gastroenterology and American Gastroenterological Association guidelines for the diagnosis of celiac disease call for an endoscopy with biopsy. An AGA practice update, which Murray co-authored, also advises a biopsy, but also notes that a TTG result of 10 times the upper limit of normal at high levels “is a reliable and accurate test for diagnosing active celiac disease.” Murray said a practice update does not change guidelines but describes emerging processes.

Celiac disease guidelines from the North American Society of Pediatric Gastroenterology, Hepatology and Nutrition (NASPGHAN), an organization with about 1800 pediatric gastroenterologists in the United States, Mexico and Canada, say that the diagnosis of celiac disease in children requires an intestinal biopsy in all cases.

A NASPGHAN clinical report published in 2016 said that although a no-biopsy diagnosis of celiac disease is desirable, there are risks associated with skipping the procedure. Lack of a standardized blood test and marked variation in analysis of blood tests could lead to some children being falsely diagnosed and placed on the gluten-free diet. “Because a strict gluten-free diet is cumbersome, expensive, and has an adverse impact on the quality of life of the individual, it is important to confirm the diagnosis before recommending such a lifelong dietary change,” the report says.

A no-biopsy approach can reduce the cost, risk and caseload associated with an endoscopy and biopsy in adults with celiac disease, the study concludes, emphasizing that the evidence shows that at high levels, the TTG test performs well in identifying adults with celiac disease. But validation of test analysis would enable the approach to have the greatest impact on adults, the study adds.

But Murray pointed out that the approach faces “spirited defense of the biopsy.”

Lebwohl agreed. “A highly elevated tissue transglutaminase antibody means that it is highly like that someone has celiac disease,” he said. “We can now estimate that ‘highly likely’ is 95 percent. Is that high enough? This will be a matter of debate.”