Some sushi is gluten-free while some is not. 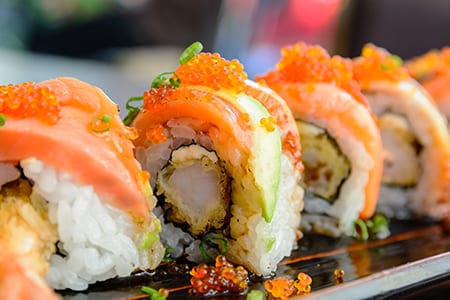 Sushi is a Japanese dish prepared with vinegared rice and fish, other seafood products, vegetables and even some fruits. It is typically served with soy sauce, wasabi and ginger. There are so many varieties and ways to prepare sushi that the answer of it being gluten-free depends on a number of factors. It’s always best to reach out to the restaurant/chef ahead of time to discuss which, if any, of their sushi rolls or sashimi are gluten-free.

One area to be cautious of for hidden gluten is sushi rice itself. According to Rachel Begun, a registered dietitian who answered our Answers from a Dietitian: Is Sushi Safe to Eat? question: “some sushi rice uses non-distilled white vinegar, which is made from either corn or wheat. If the vinegar used [is wheat-based], then the sushi rice will contain gluten. In addition, sushi rice is sometimes prepared with a chicken broth that contains gluten…another reason to ask in advance.”

Soy Sauce and Other Added Ingredients

Soy sauce is another area of concern, as most soy sauces are made with wheat. Alternatives to soy sauce include gluten-free tamari or coconut aminos. Watch out for sushi rolls that include soy sauce in their preparation, have marinated eels (unagi) or other fishes, or that may include fried or breaded ingredients such as tempura style vegetables or fish.

“Spicy” rolls, such as spicy tuna or spicy salmon rolls, may also contain hidden gluten ingredients and spices, depending on how they are made. With wasabi, which adds a spicy kick, the version used in the United States is often not the real thing and may contain gluten. Ask your restaurant if they used 100% real wasabi and if not, what ingredients are used to make their imitation wasabi.

Additionally, the  imitation crab, also called surimi, found in many rolls such as California rolls, are made from fish and a food starch, which often contain wheat and therefore gluten. Some restaurants may not know that surimi contains wheat/gluten, so be careful of any rolls that contain this ingredient even if the restaurant claims a California roll or other surimi roll is gluten-free.