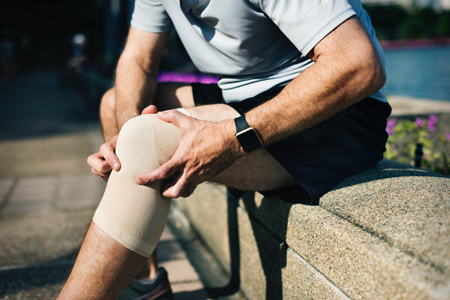 Arthritis is inflammation, pain and stiffness in the joints. There are more than 100 types of arthritis.

What is the connection between celiac disease and arthritis?

Celiac disease patients are four times more likely to have early signs of arthritis in the lower limbs than the general public according to researchers at the University of Frederica II of Naples. However, patients who have been on the gluten-free diet have a decreased risk compared to those newly diagnosed, the researchers have also found.

A study published in the journal Rheumatology in 2013 was the first to show a greater risk of inflammation of connective tissue between tendons or ligaments and bones in celiac disease patients who don’t have any symptoms of this problem.

Scientists originally found that the increase in this inflammation, called enthesitis, did not correlate with how long a patient had been on the gluten-free diet or results of tissue transglutaminase tests (tTG), which measure antibodies to gluten produced by those who have celiac disease.

But a follow-up study in 2014 concluded that newly diagnosed celiac disease patients who had positive tTG tests had more of this inflammation than those who were on the diet for at least a year and had negative test results. Nearly 50 percent of study participants who were newly diagnosed had enthesitis compared to about 27 percent of those on the diet.

The 2013 study also found that ultrasound testing was better than physical examination at detecting the early signs of enthesitis.

“These findings strongly suggest the presence of sub-clinical enthesopathy in a large portions of celiac disease patients with negative clinical examination,” the study authors wrote.

Sixty celiac disease patients participated in the 2013 study, with 24 or 40 percent showing early indications of inflammation compared to 10 percent in the control group.

Rheumatic disease: Conditions characterized by inflammation that affects the connecting or supporting structures of the body, including joints, tendons, ligaments, bones and muscles

Celiac disease is associated with other autoimmune conditions, including joint disorders, the study authors wrote. They note that rheumatic diseases occur more commonly in celiac disease patients than the general public.

Researchers concluded the study underlined the ability of ultrasound to detect changes in tendons and ligaments, better measuring how prevalent these abnormalities are in celiac disease patient who don’t yet have symptoms.

Where can I learn more?

Do you or a family member suffer from arthritis? You may have celiac disease. Find out now. Take our
Celiac Disease Symptoms Checklist