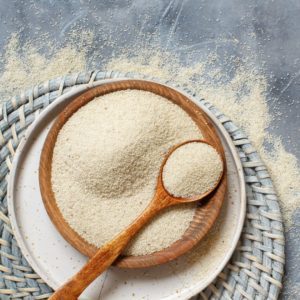 Fonio, sometimes called iburura, acha or hungry rice, is a small type of millet from northern Africa. Some consider it an ancient grain. It is one of the fastest-growing grasses, reaching maturity in just six to eight weeks.

Fonio is high in fiber and B vitamins and may have the highest amount of calcium of any grain. Its mineral content makes it an excellent option for anyone who doesn’t eat much protein or dairy, including people who are lactose intolerant or vegan.

How do I Cook Fonio?

There are two types of fonio, white and black. They taste the same, but black fonio has a slightly higher nutrient and fiber content. Both types can be used to make porridge, breads and beers.

Fonio is easy to cook and will absorb whatever spice or flavor it’s mixed with. Simply boil it in water (ratio of ¼ cup fonio to 1 cup water) until it absorbs the liquid, then use it in a dish the same way you would rice or quinoa. It can also be ground into a flour and used to make breads, cookies and pastas.

Fonio isn’t commonly found in the United States, but specialty stores and online providers usually offer this nutritious grain. As always, be sure to read the label to ensure it isn’t mixed with other gluten-containing ingredients.