Stories and Advice from Gluten-Free Students

By MC of Gluten-Free Froggie

My story starts back in middle school, when I found out I was allergic to milk – several years before I found out gluten was an issue. Reactions back then were mild and delayed at first. They did speed up and get a bit more concerning when I was in high school, but nothing I couldn’t deal with.

My senior year, I knew exactly what I was going to major in college and I knew which school I wanted to go to. When I applied, food was nowhere on my list of concerns. I had always managed to find dairy-free food everywhere I went – camp, home, friends’ houses, etc. My dad was a bit concerned, but I just figured I’d do like I always had up until then. I even met some of the cooks at the school when I went on a tour of the college and stayed overnight. They seemed nice and helpful.

I didn’t realize that the cafeteria in this tiny school (600-ish students) was totally unprepared to deal with any dietary restrictions adequately. I talked with the cafeteria manager at the beginning of the semester, but I learned the scary way that she really did notget food allergies or any type of dietary restrictions… nor did the rest of the school. Only a few friends “got” it to some extent. Cross-contact was rampant. In the picture below, from right to left were croissants, ham and cheese, and the servers didn’t change their gloves between each item. This wasn’t the only time I witnessed cross-contact, either. 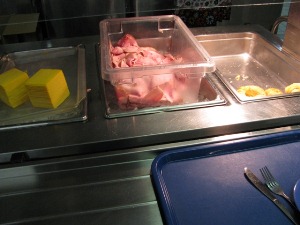 I frequently relied on a few friends who happened to work there and got it, and I also frequently ate rather odd-looking meals. Some days all they gave me was a plate of noodles, or they’d make me veggies apart from the regular batch and give me a piece of chicken. Sometimes I had no meat. If I could eat one or two things they were serving, then they’d usually give me extra to make up for having less food. Except this meant I wasn’t getting a properly balanced diet. The salad bar was tiny and I found cheese in other things more often than not. Frequently my food was bland, but I was just thankful to have something to eat.

In the second semester, I tried to find a way of getting out of the required meal plan for all residential students. I tried. Begged. Pleaded. I was just banging my head against a brick wall. The Dean of Students said I didn’t have a good enough reason to get exempt from the mandatory meal plan (you had to pay for at least 7 meals per week). He objected further that because students were not allowed to cook unless they were using the dorm parents’ kitchen, he saw no way that I could feasibly make all of my own food. He never let me try.

In the end, I came home and made the difficult decision to not return as an on-campus student to that school. It was that summer that I discovered I can’t eat gluten and just how sensitive to gluten my body is. Having experienced the challenges of that tiny school’s cafeteria, I saw no way I could return there safely. So I transferred schools and became an online student. A lot of people think they could never do that. It isn’t always easy and you need to discipline yourself to work on lectures and assignments completed.

But it is possible.

I do miss being a residential student. I also miss the library (public libraries don’t have the necessary materials for college papers). But being an online student has given me the opportunity to be at home with my family while I attend college and to have the food issues under better control. It also gives me more time to bake (I have access to the oven 24/7!) and unleash my creativity in baking.

Though most college students are residential, it doesn’t mean that you have to be a residential student. Nor does it mean that all colleges are bad with feeding students with dietary restrictions. You can be an online student and still get a good education. Sometimes being on campus is too risky due to food for some people. But that shouldn’t be a reason for not being able to pursue a higher education.